I've been looking for a quick way to put together a web stack for some time now.

There are a lot of common tools (backbone, requirejs, bootstrap to name a few) that I use in every project and sometimes it gets quite tedious to setup. 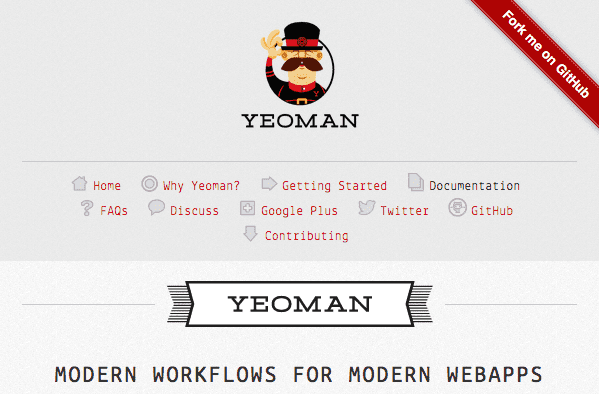 They have a bash script to check dependencies and help install it. The script itself has nice looking output with checkmarks, crosses and ascii art as well as simple instructions to help get you running.

It has many features and tools that have been developed over time by a large community, borrowing from many projects and best practices, and is maintained by some pretty famous people in the web world.

For a more in depth description, you can visit their FAQ page.

Obviously, the first thing I did was install Yeoman.

For my particular system, I had to install 4 things:

I'm not quite sure why it requires compass to setup the tool. I thought it was something you used with sass to preprocess CSS.

I ended up installing compass without sudo and then got the rest of the dependencies in place.

At some point, I got a prompt asking to track my activity.

I was kind of caught off guard by this but they were very transparent about how they will track you and what they wanted to do with the data.

They even went on to explain how it all works and encourage you to have a look at the code if you're interested.

The next thing I did was create a folder and ran yeoman install. Again, I was prompted for things such as compass, bootstrap, requirejs and maybe a couple of other things.

First thing I noticed was it didn't ask me about backbone.js at all. In the documentation, there were some lines after yeoman init.

I tried running yeoman init backbone. It did some stuff and overwrote some files.

That didn't seem right so I read on.

Apparently, you can add backbone to your project by running yeoman install. I did that and it was installed as what they call a "component".

At this point, I was a little confused.

I decided to see what an AngularJS project looked like because one of my co-workers was pretty excited about it.

Their server is pretty nice. As soon as I ran yeoman server, it opened up my browser to localhost:3501 and showed me the app.

I proceeded to edit the app/views/main.html file and watched Yeoman reload the page (uses LiveReload.js) in my browser for me, sweet!

At this point, I remember Yeoman requiring PhantomJS for headless browser tests.

Around this point I decided to end my trial run with Yeoman.

These are my personal opinions about the short experience I had with Yeoman.

What made me sad

Some issues I encountered

I really like the stack and the goals of the project. It is pretty up-to-date with all the tools it uses.

It's still a very young project (v0.9.6 as of this writing) but looks very promising. The current build status is failing but I'm sure that'll be taken care of in the near future.

It's fun to see where the project is going and I plan to keep playing with it to see how I can fit it into my own workflow.

I actually tried it a few months ago but I can't remember what I thought of it at the time...which prompted me to write this post :)

If you want to be on the bleeding edge, play with the newest tools and see the future of the web, I urge you to give Yeoman a try.